End the aberrant spectacle of dogfighting around the world!

Bullfights are petty, unworthy, aberrant spectacles in which bulls have no chance to defend themselves and are forced to endure the violence of armed men until the bulls are killed.

It is a disgusting spectacle that is justified, so to speak, as being part of the cultural heritage.

Bullfighting is, in fact, an ancient practice dating back to the second millennium BC. on the island of Crete, Greece: however, at that time, men fought unarmed, without spears to injure the bulls and without horses.

In modern times, to weaken the bulls before the bullfights, the bulls are drugged, beaten, and their horns are filed to prevent them from goring the torero in the bullfight. The bullfight itself further subjects the bull to torture: harpoons are driven into the bull’s muscles to force the bull to lower its head, and the bull is forced to endure large blood loss in order to weaken it and render it harmless.

If by any chance after the bullfight the bull is still alive, its ears or tail are cut off like trophies to human cruelty. 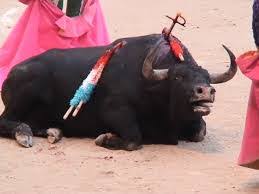 No modern society should continue to allow this cowardly and infamous spectacle, practiced in much of Spain, in the south of France, in Portugal and in various countries of Central and South America (including Mexico, Venezuela, Peru, Ecuador, and Colombia).

An astonishing number of bulls, over 200,000, are estimated to be killed in bullfighting each year. 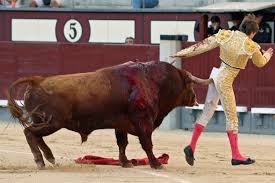 Help us to end this infamous cruelty against animals! 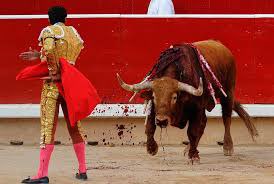